I grew up in Tenafly New Jersey, a town I can call the quintessential suburb first transformed from a farming community by the reach of the railroad in the late nineteenth century, and firmly established as one of the many suburban bedrooms of New York City after the second world war.  Two tracks ran through the town, and 44 trains went on them daily, and starting in 1946 took my father down to Jersey City where he could catch the Tubes to Manhattan - we call that the PATH train today - and to his first office at 150 Broadway.

After I went to college, and lived in Vermont, Maryland, and Massachusetts, I returned to the New York area and began work in the publishing industry - and then into teaching - but ultimately, after marrying, into corporate sales for 15 years.  And wouldn't you know, but in the 1990's my office was actually at 150 Broadway.

It's that sort of over-lapping that convinced me that there is much to be found by simply paying attention and asking questions.  When I first moved into Manhattan I ran around it - literally - and was fascinated by the neighborhoods.  A different one every ten blocks!

Finally I realized that this is the career for me: walking around, telling people of the neighborhood's history - and asking questions of my travelers as well as those who pass by on the street - learning, forever learning.  It's fun!

Walk the George Washington Bridge to the Palisades and ultimately Tenafly, NJ 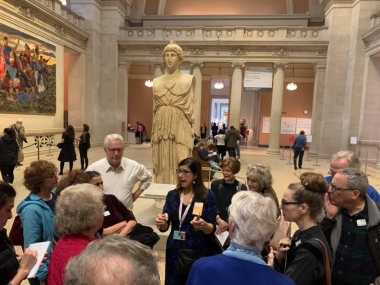