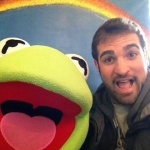 Since summer 2008 Matt has been giving guided tours of New York City to all kinds of audiences: school groups on private coaches, travelers from all over the world on Water Taxis and double-decker buses, and small groups and families by foot and subway. The one constant in all these tours: Matt’s passion and love of New York City!

Born in Philadelphia, Matt was never far from NYC. It was distant enough, though that every visit was a treat. Before attending Ithaca College from 2004-2008 Matt already knew New York was his next destination. Matt moved to the city after graduating from Ithaca in 2008 and was giving tours within weeks. After a year and a half on the double-deckers Matt moved onto working with the Levy’s Unique New York, Contiki Holidays, many other companies, and himself! No matter whom he’s working with, Matt always finds a way to infuse his love of music into his tours, a love that outdates even his love for the city.

Since before Matt could remember, he’s been seeing live music. His first show was likely with his father at the Philadelphia Folk Festival, still a wonderful yearly event. Today, Matt keeps photo albums filled with ticket stubs with concerts ranging from Blind Melon to Al DiMeola, and from Phish to Weezer. One of New York’s major draws for Matt was the ability to see music any night of the week, something he often takes advantage of. Now, Matt his psyched to combine his career as a tour guide and love of music into one with music history based NYC tours! Take a tour and learn about folk music in Greenwich Village, the Punk scene around CBGBs, or Jazz history in Midtown and Harlem. All this while being accompanied by one of the most passionate and charismatic New Yorkers and music lovers around!