Link(s):
New York Tours by Gary
Language(s) :
English
Availability:
Anytime I am not already booked, I am available.

Gary Dennis was born and raised on the Upper West Side of Manhattan.  After attending the Fiorello H. LaGuardia High School of Music and Arts, Gary received his Bachelor of Arts in Theatre, with a minor in Theatre History (specializing in New York City) from Brooklyn College.

Growing up in a house of insanely competitive know it alls, Gary discovered a way of getting some parental attention by developing his passion for New York City history as well as for movie history.  At the dinner table, it was not just who was loud enough, but who knew the most.  Gary was / is loud and knows enough.  Gary devoured New York City history books along with the biographies of movie stars, writers, directors and producers of Hollywood’s “golden age”.  Gary was probably the only kid on the block who had heard of Irving Thalberg and understood Thalberg’s contributions to motion picture history.  To remain steps ahead of his brothers in the contest for parental attention and approval, Gary also cultivated a deep appreciation and knowledge of Vaudeville theatres, movie palaces, the architects who designed them, the significance of each theatre and their locations throughout the five boroughs of New York City.

After working as an actor (SAG, AFTRA and AEA) for a few years, Gary turned his “day job” into a full time passion.  As Gary said, “I did not want to smell like food, like too many other actors who waited tables, so I took a job that involved one of my greatest passions, movies.”  For ten years, Gary managed Movie Place, one of New York City’s largest independent and best (New York Magazine Best of New York 1997) movie rental stores, and in 1998, he became the proud owner of the store.

Movie Place was one of New York City’s original independent video stores and, under Gary's guidance, became a longtime favorite video store on Manhattan’s Upper West Side.  During 23 years of business, Gary developed one of the most extensive film inventories of any store in the country, with a library that included one of the best collections of American film, from early silent pictures through the Golden Age of Hollywood to the rise of the American independent film industry.  The store also boasted one of the most comprehensive foreign film collections in the country, including films from Europe, Asia, the Middle East, Africa and South America.  Housed in a quaint, if crumbling brownstone, the store was a beloved neighborhood hangout where people came to schmooze with Gary (a popular local celebrity and movie critic) and his staff about the latest Wes Anderson movie or debate the merits of the studio system.

In 2006, with the Movie Place as his calling card, Gary launched a one-man effort to rename 103rd Street Humphrey Bogart Place, in honor of the late actor who grew up there.  In his argument before Community Board 7, Gary pointed out that Mr. Bogart was a not only the internationally recognized face of American film, but a product of the Upper West Side as well.  Gary’s efforts paid off with not only a street renaming (a big deal in this city), but a plaque on the city-owned townhouse memorializing the structure as the childhood home (1899–1923) of Mr. Bogart.  A ceremony was held on June 24, 2006, hosted by Gary and attended by various New York City commissioners, elected officials and (most importantly) Lauren Bacall and her son, Stephen Bogart.  For his efforts, Gary was the subject of numerous articles in The New York Times Link to New York Times article Another link to the New York Times Another link again to the New York Times and was honored with “The Westie” award given by Manhattan Media (publisher of The Westsider, Our Town, and other weekly newspapers around Manhattan).

Despite this wonderful addition to the neighborhood and the acclaim it brought to the store, Movie Place became the victim of greedy landlords fueled by the raging real estate boom in the city, who more than doubled the store's rent in the Fall of 2006.  A valiant petition drive, spear-headed by some resourceful (and frustrated) customers turned the store into the “poster child” for dying “mom and pop” businesses in New York City (click here for link to The New York Times article), but to no avail.  In December 2006, Gary was forced to close the business and in January 2007 sold to Columbia University one of the greatest private collections of DVDs and videos ever assembled.

Since then, Gary has focused on parenting his two young children, but keeps his feet wet in the movie world, consulting in various forums where a film "know it all" is needed.  He recently gave a well attended power point presentation of the criminal and entertainment history of the area between 96th street and 103rd street on the west side.  Called a “film scholar without portfolio” by the New York Times, Gary has also become licensed as an official New York City tour guide, which is just a formality, since he has been lecturing for years, to anyone who'll listen, about every corner of this great city

UNDERGROUND NEW YORK CITY - THE EMPIRE BENEATH THE STREETS

It's right there under your feet, you probably ride it every day, but how much do you know about this city's amazing subway system. I will give you the secret history and inside story of the creation of the original 1904 subway line and how it grew into the most extensive transportation system in the world. All the art, all the history, all the technical breakthroughs, all the "whys" and all the shenanigans that went into this spectacular achievement. A unique experience for seasoned locals or visitors to our fair city. Get a look at the subway that few people, even lifelong New Yorkers, fail to recognize. This tour only explores the areas of the system that are open to the public but in most cases overlooked. We do not go into the tunnels or any area that is not open to the public. The Guide Association of New York City, The City of New York, The Metropolitan Transit Authority and their vast legal teams would frown upon the idea of people on a tour getting arrested, injured or killed.

When people think of 42nd Street, they usually do not think of architecture -- they think of Times Square. However, along 42nd Street, this city offers some of the best work by some of this country’s greatest designers. Along this one avenue, there is the Art Deco icon, the most perfect railroad station ever built, the second largest library in the United States and the block with the highest concentration of theaters ever built. In between all of that, there is some of the most beautiful and under appreciated buildings ever designed and constructed.

New York is not just a collection of tall buildings; it is a collection of neighborhoods that changed with a growing city. You will see how these changes will effect what would happen on its avenues over time.  The mysteries of how and why a neighborhood will transform, how what once was and what would be will influence architects and their design choices, will be revealed and explained.   This is a tour not just for architecture students, but a great introduction into the “how’s” and “whys” New York City became the city we all know and love today

See places that might look familiar, even if this your first time here in New York. Over 350 films have been made in Central Park, making it the most filmed location in New York City, and there are places and sites you might have seen in a movie.

You will see some of the original 36 bridges, some original structures, some Depression-era intrusions and 'improvements.' You will also see what 35 years of restoration looks like. No matter what time of year, this park is one of the most beautiful places in the world; different during each season but always incredible.

The meet spot is at the Maine Memorial in Columbus Circle. Your guide will discuss the grid of Manhattan, go over a couple of hundred years of New York City history within a few minutes and talk about what was here before the park. Then, head off into Central Park!

This is a walking tour. Although there are hills, there is nothing terribly steep. The tour can be routed with fewer hills and stairs to deal with. The end point will be a mutually agreed upon location. There are two great museums on either side of the park from each other. In addition, Museum Mile on Fifth Avenue is on the eastern side of the park.
Weather, number in the group, how the group moves, and special events that cause a re-route of the tour can effect the number of sites seen and how long the tour takes. Your guide wants to show you as much as possible, so more often than not the tour runs a little longer. So if you have an event you need to get to by a certain time, please advise at time of booking.

THE UPPER WESTSIDE - THE OLD VILLAGE OF BLOOMINGDALE

The general, criminal and entertainment history of the area between the old Bloomingdale Road (Broadway) and Riverside Drive, from Columbus Circle to 110th Street. Starting at the Cathedral Of Saint John The Devine (the largest gothic structure in the world) tour highlights include Humphrey Bogart's childhood home, Victor Herbert's home, buildings designed by famous New York architects. Former homes of Hollywood legends, legendary writers, legendary composers and even a couple of legendary criminals. See sites that played host to battles during the Revolutionary War, while George Washington escaped north. 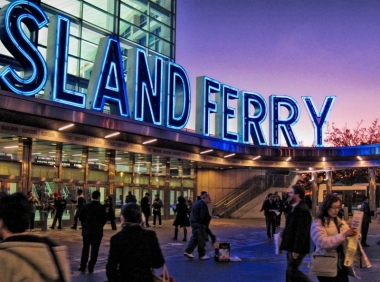