GANYC Encourages its Members and All NYC Tour Guides to Comply with New Rules; Will Continue to Seek Alternate Solutions to Overtourism Issues at These Venues and Across NYC

NEW YORK - The Guides Association of New York City (GANYC) announced today that, despite new rules by the National Park Service (NPS) to ban commercial guided tours from within the Statue of Liberty Pedestal, the Statue of Liberty Museum, and the National Museum of Immigration at Ellis Island, guided tours continue to these two great sites and remain the best way to experience them. Commercial guided tours at these islands and throughout New York City actually help limit the effects of overcrowding, despite claims by NPS to the contrary.

While it continues to strongly oppose the new regulations, GANYC -- the association of professional tour guides in New York City -- urges all New York City tour guides and tour operators to comply with the new NPS rules. GANYC will continue to monitor the situation and lobby NPS and its partner Statue Cruises on behalf of all licensed New York City tour guides to roll back these overreaching rules. GANYC is working on strategies to address the larger issue of overtourism in New York City, and invites and will solicit input from all sectors of the travel and tourism industry, including government, tour operators and tourism associations.
.
GANYC officials stressed that, notwithstanding recent media coverage implying there will no longer be guided tours to the Statue of Liberty and Ellis Island once the new rules go into effect May 16, commercial guided tours to the islands do indeed continue to operate. New York’s professional tour guides and the tour operators who employ them have tweaked their tours to deliver amazing visitor experiences while complying with the new regulations. Per NPS, guided commercial tours are still allowed on the grounds of the Statue of Liberty and Ellis Island.

“GANYC’s professional tour guides, and all licensed tour guides working in New York, strive to present their guests with the best experience possible while having the smallest possible impact on the general public, both at attractions like the Statue of Liberty and Ellis Island, and on the streets of the greatest city in the world,” stated GANYC President Michael Dillinger. “We will continue to discuss the new rules with NPS in the hopes of allowing tours access to the inside of these sites. In the meantime, we have instructed all of our members to comply with the new regulations, and urge all licensed New York City tour guides to do the same.”

“New Yorkers like to complain about tourists, but the economic impact of tourism to New York City is undeniable and indispensable,” Dillinger added. In 2017, travel and tourism brought $44.2 billion in spending to the city, and was responsible for $26.1 billion in income and 391,400 jobs, according to NYC & Company, the official visitors bureau for New York City. “GANYC will continue to train its member guides to be responsible citizens when leading tours and be respectful of all venues and neighborhoods we visit.”

NPS and Statue Cruises unilaterally imposed the new rules without consulting any travel and tourism professionals under the guise of reducing overcrowding, improving the visitor experience and providing better security, but GANYC believes these new policies will have the exact opposite effect.

NPS wants visitors to the Statue of Liberty and Ellis Island to join NPS-led tours or use the audio guides that are included in the ticket cost when inside these venues. However, NPS Park Rangers lead one tour per hour on each island, and do not have the staff to handle the increased volume should visitors join the NPS-led tours. GANYC estimates that during the busiest tourist season, there are 50-plus guided tours daily to the islands with upwards of 1,000 guests, out of 25,000-plus overall visitors. The audio guides are frequently in short supply, and cannot provide the necessary context and nuance needed to best appreciate these two important sites.

“The math used by NPS does not add up,” said Michael Morgenthal, GANYC secretary and chair of its Industry Relations Committee. “Guided tours represent about 4% of all visitors to the Statue of Liberty and Ellis Island, so these new rules will not solve NPS’s claim of overcrowding -- they likely will make things worse. Tour guides expose 20+ people at a time to artifacts and exhibits in the museums, whereas only 2-3 people who are not on a tour can take these in at a time. NPS's solution actually will degrade the visitor experience and yet, it continues to advertise and promote these venues on its social media, causing more overcrowding than guided tours ever do.”

A sampling of recent TripAdvisor reviews confirms that guided tours remain the best way to visit the islands:
May 12, 2019: “Our tour guide was a wealth of information and we learnt (sic) so much more than we would have, had we just caught a ferry over and wandered around.”
May 12, 2019: “(Our guide) made the experience to the Statue of Liberty informative and thought provoking. When disembarking for Ellis Island, he led us in as if we were all immigrants, giving us a powerful sense of what it was like to arrive, be processed in a large hall, and finally to be given permission to stay in the country. (He) was one of the best guides we've had in our travels. He made the day special, and we ended the tour with an awe of the history of immigration to the US.”
September 18, 2018: “What made the experience more special was our tour guide … the extra special touch, the one you can't get by simply renting those machines, was his theatrical sense. He recited the Statue of Liberty poem (inside the museum) and it brought tears to my eyes; he marked our backs as we climbed the steps at Ellis Island and later explained what the markings meant … he interviewed a couple and later reviewed their answers and told us whether they would have been admitted to the U.S. based on those answers; he divided us up into three groups as we walked down the steps not knowing what it meant until we reached the other side…I know the park rangers that were on hand would not do that!”

“Taking a guided tour to the Statue of Liberty and Ellis Island opens visitors’ eyes to the significance of these sites in a way that an audio tour or an overcrowded Park Ranger-led tour can never do, and New York’s professional tour guides are eager to continue sharing the stories that make these venues so special to thousands of visitors a week,” Morgenthal added. “Even though GANYC will continue to fight these new rules, we remain confident that those who join guided tours to the the islands will enjoy a richer experience than those who visit these sites on their own.” 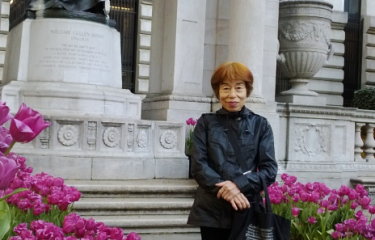 Fumi Arai I am bilingual in English and Japanese.  I have had more than 10 years experiencce as New York City  tour guide. Before that... read more 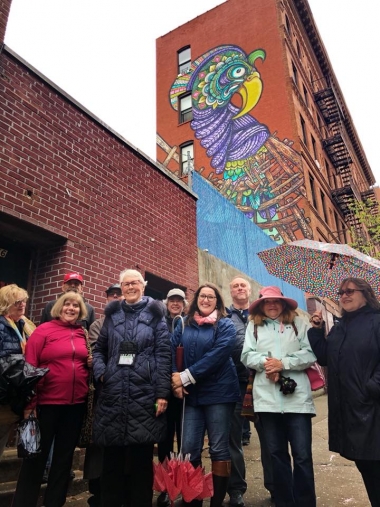